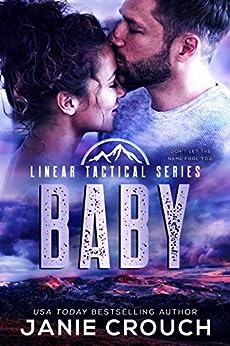 Being Linear Tactical’s easiest-going younger brother has never been a problem for Baby Bollinger. He likes people. He likes laughing. He likes life.

But he has secrets buried deep under his charming smile that would change everything.

Quinn Harrison-Pritchard doesn’t have secrets. What she does have is a big mess of a life that’s painfully public.

Jobless. Blacklisted. Broke. Alone. Exactly where nobody wants to be as they hit their 39th birthday.

Oak Creek is supposed to be a fresh start. A chance to lick her wounds and figure out a plan. One that doesn’t include Baby Bollinger. But the vigorous, mouth-watering mechanic—anything but a baby—is pursuing her with a single-minded focus.

And doesn’t seem to care that she’s twelve years his senior.

But danger has followed Quinn to Oak Creek, someone from her past who is convinced she’s wronged him. And that she needs to pay with her life.

Only Baby can save her. But to do so, he’ll have to face the secrets he’s let define him for way too long. And resurrect the warrior buried inside.

USA Today bestselling author Janie Crouch brings you that perfect blend of heart-melting romance with a side of danger. A sexy, protective hero not afraid to fight for what he wants. BABY is a full-length novel with no cliffhanger, no cheating, and a HEA guaranteed—come escape reality for a little while!